Defensive driving means doing all you can to prevent crashes. As a defensive driver, you will give a little.

You will change your driving to fit the weather conditions, the way you feel, and the actions of other drivers, bicyclist and pedestrians. Follow these steps to avoid crashes. 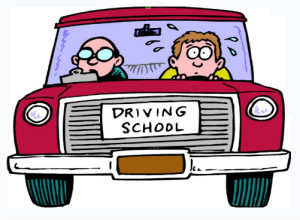 Use these defensive driving tips is you see what you are about to be involved in a crash:

This concept is critical to the tactics used in defensive driving. The driver must have space to maneuver and time to react. The following time rules help the novice to compensate for inexperience and are invaluable in reducing risk in traffic.

This provides safe spacing when following another car at any speed. By noting when a car ahead of you passes a fixed point and counting your time to reach that point, you can determine whether your spacing is safe. Two seconds (count “one thousand and one, one thousand and two”) is the minimum safe space. This should be practiced from the passenger seat! The beginner will then develop a sense of what a safe space looks like at different speeds.

This is an approximate guide to stopping distance at speeds over 60 kph (37 mph). Choose a fixed point on the roadway ahead and count the seconds until you get there. If you counted four seconds, that point indicated your minimum stopping distance.

Ideally, the defensive driver is anticipating traffic movements and potential hazards as far away as the point the car will reach in 12 seconds. Within this distance the driver should scan the scene, including the sidewalks, and make adjustments to speed and position as necessary.

Safe driving is very much a matter of seeing what needs to be seen and making good decisions, but this is not simple to achieve. As vision expert Dr. Joe Shapiro points out, “Eyes don’t tell people what they see. People tell eyes what to look for.” In other words, experience and training play a major role in ensuring that a driver’s eyes will look in the right places at the right time. The novice driver’s biggest enemy is the complacency that comes from early success at learning driving basics. Parents’ role is to help their teen overcome that complacency and continue to build driving skills after licensing.

Attitude determines how knowledge and skills will be used. It determines whether a driver will be cooperative or competitive in traffic, whether he or she will accept a high level of risk or put into practice the concepts taught on defensive driving courses.

Your biggest contribution to your teen’s safety and effectiveness behind the wheel will be your example. Patience, courtesy, and a willingness to improve will be your best assets. Now is the time to review your own driving habits and offer your teen the example of courtesy and consideration for other road users. This may do more than anything else to ensure your teens driving safety.